Prior to its acquisition by HP, Compaq produced a wide number of desktop PCs. The Compaq Presario lineup was a small form factor desktop lineup and included the 2200. It was produced between 1997 and 1998.

The original Presario 2200 specifications were as follows:

The base modem option shipped with a 33.6K modem. This was upgradable to a full 56K with an optional add-on card. The latter plugs into the dual pin headers on the front of the board. 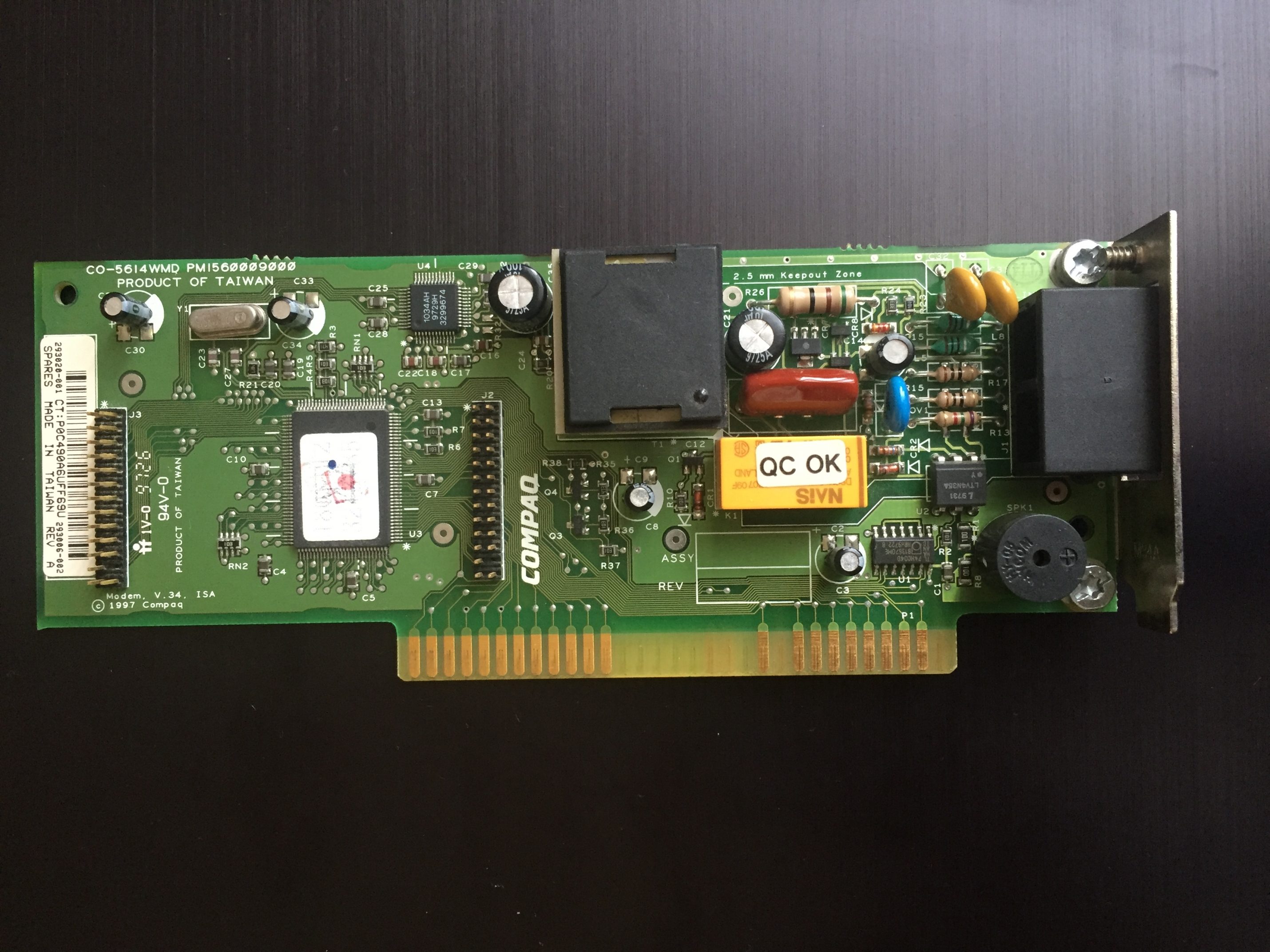 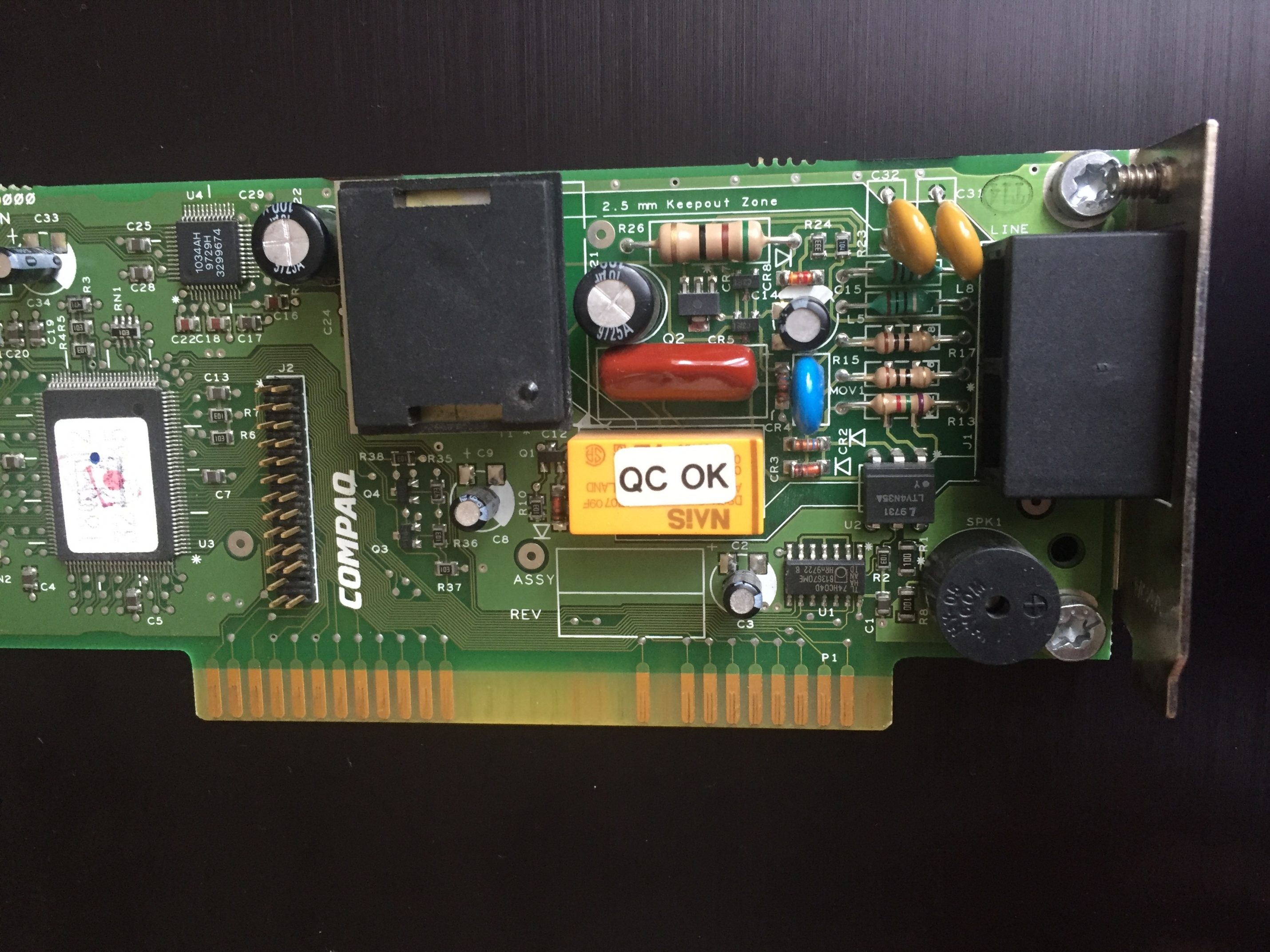 Originally purchased in ’97, it saw consistent use over the years. Here are the motherboard and original CD-Rom drive, quite a few years later: 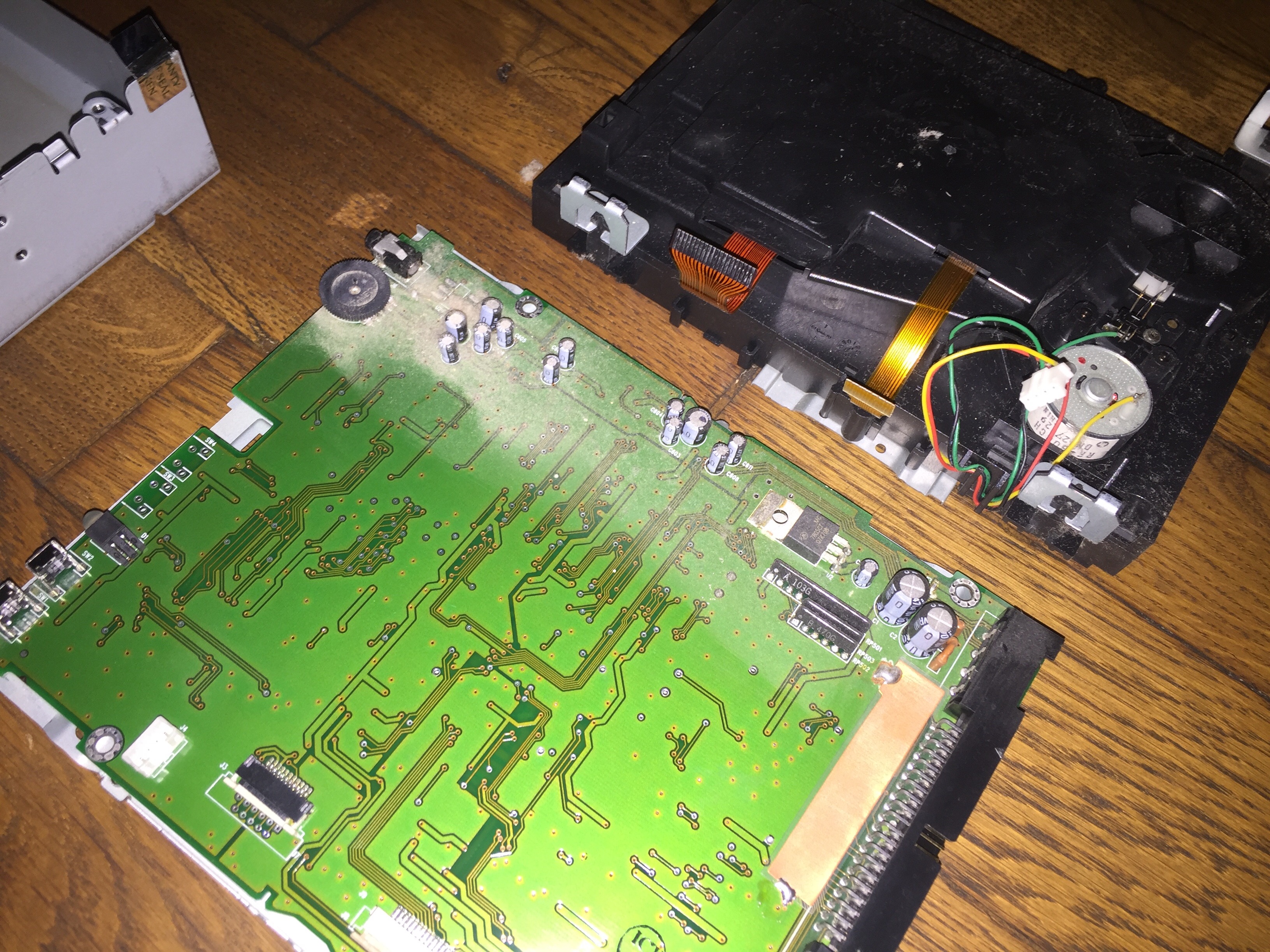 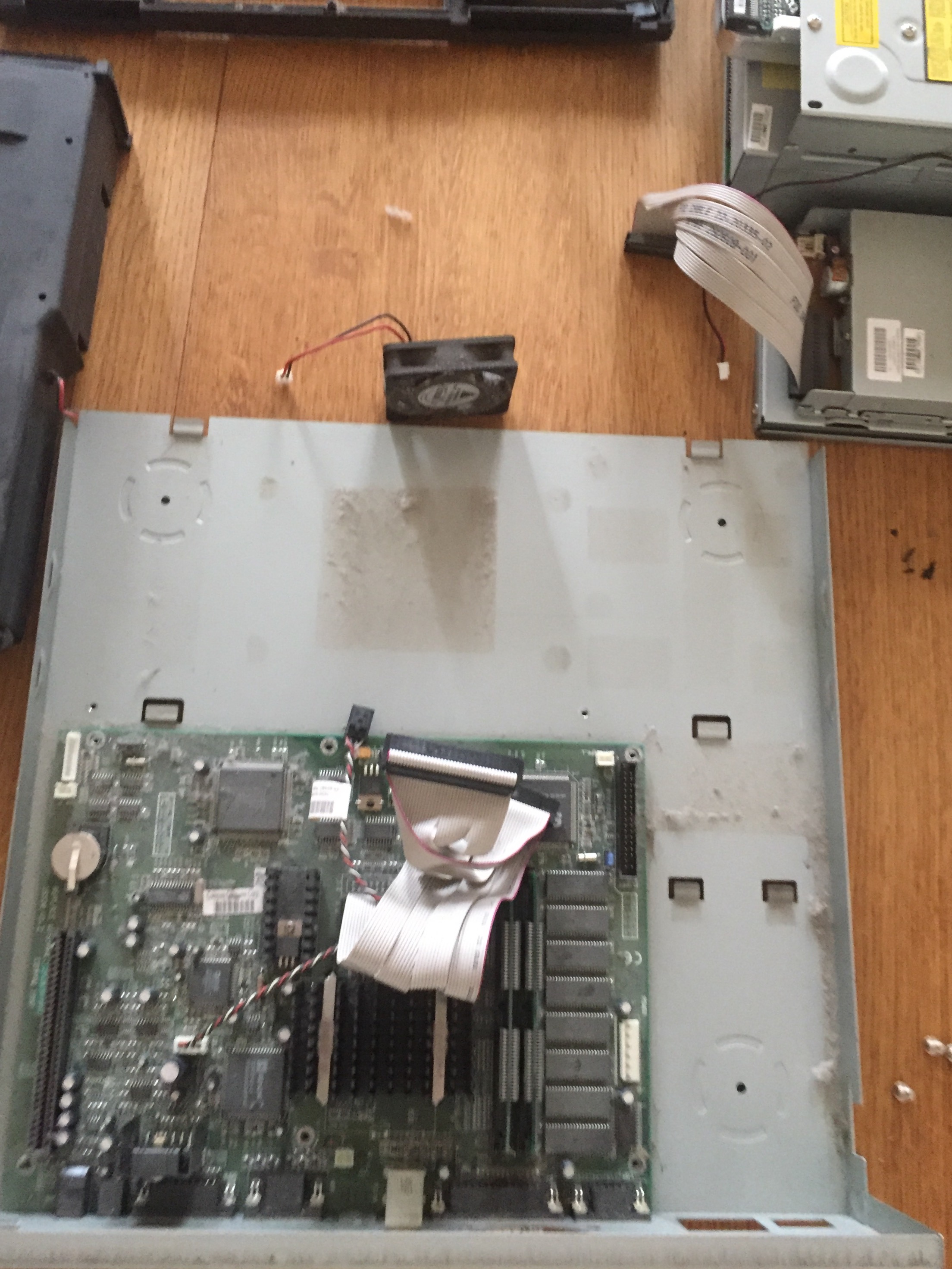 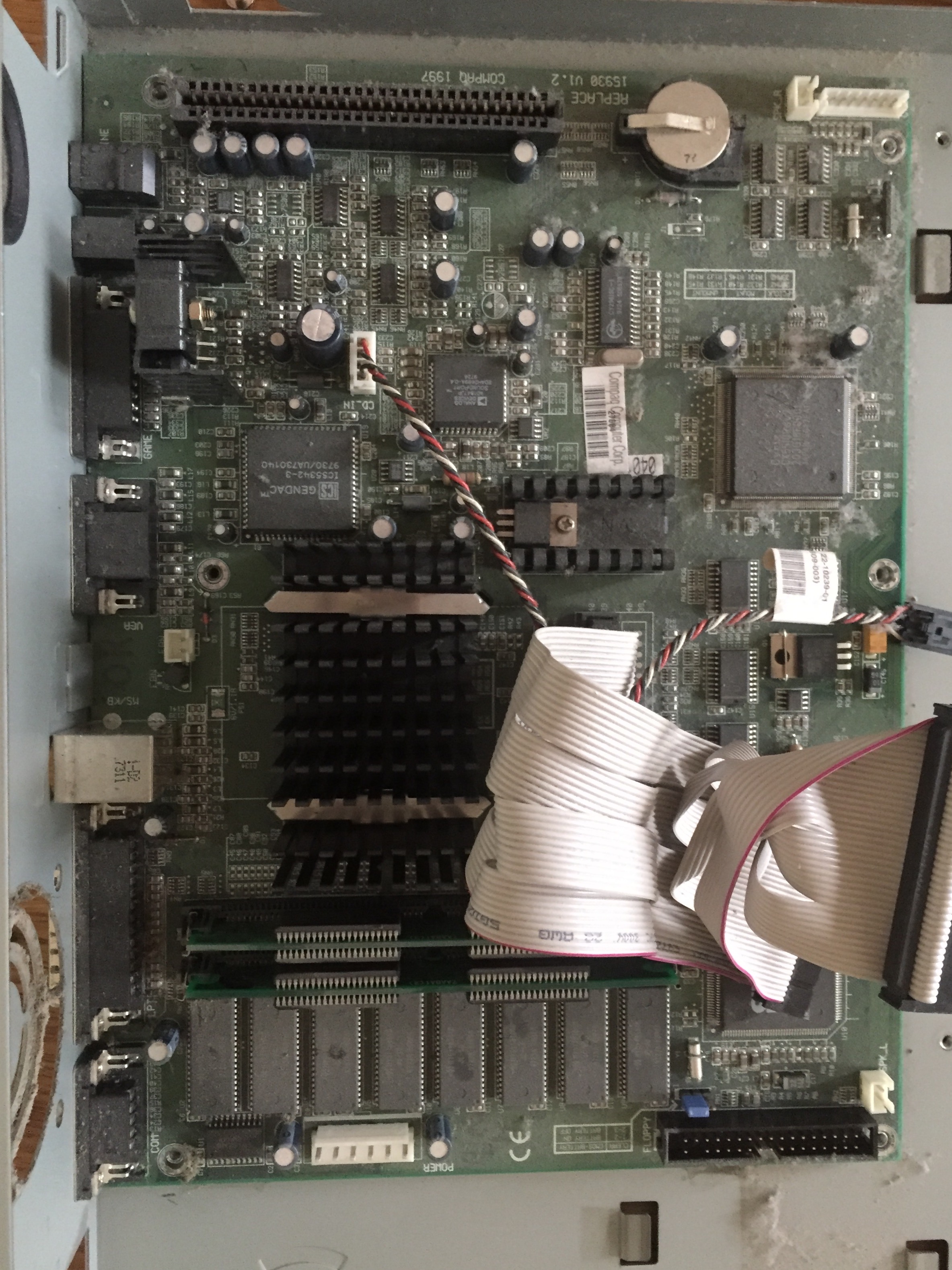 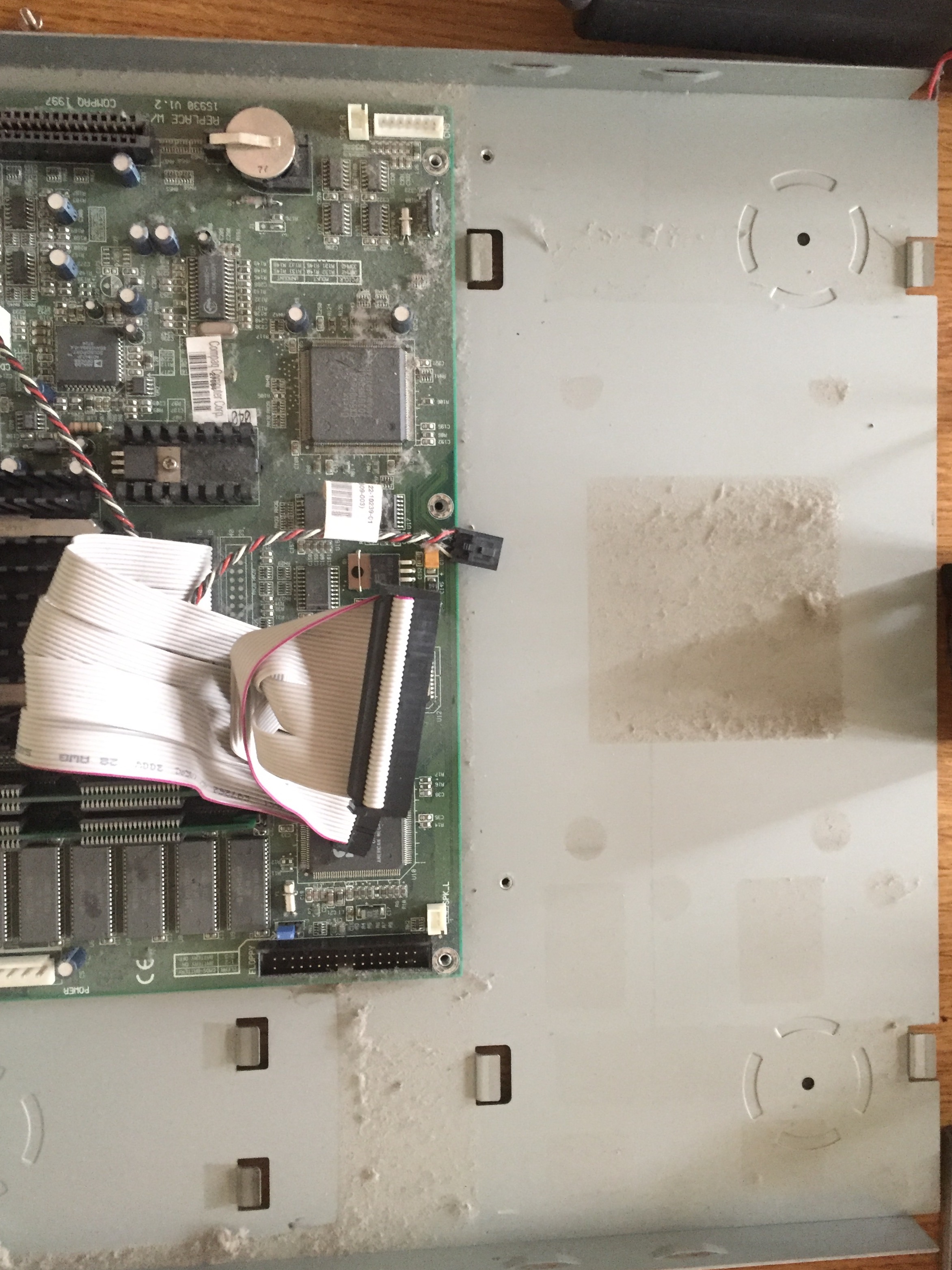 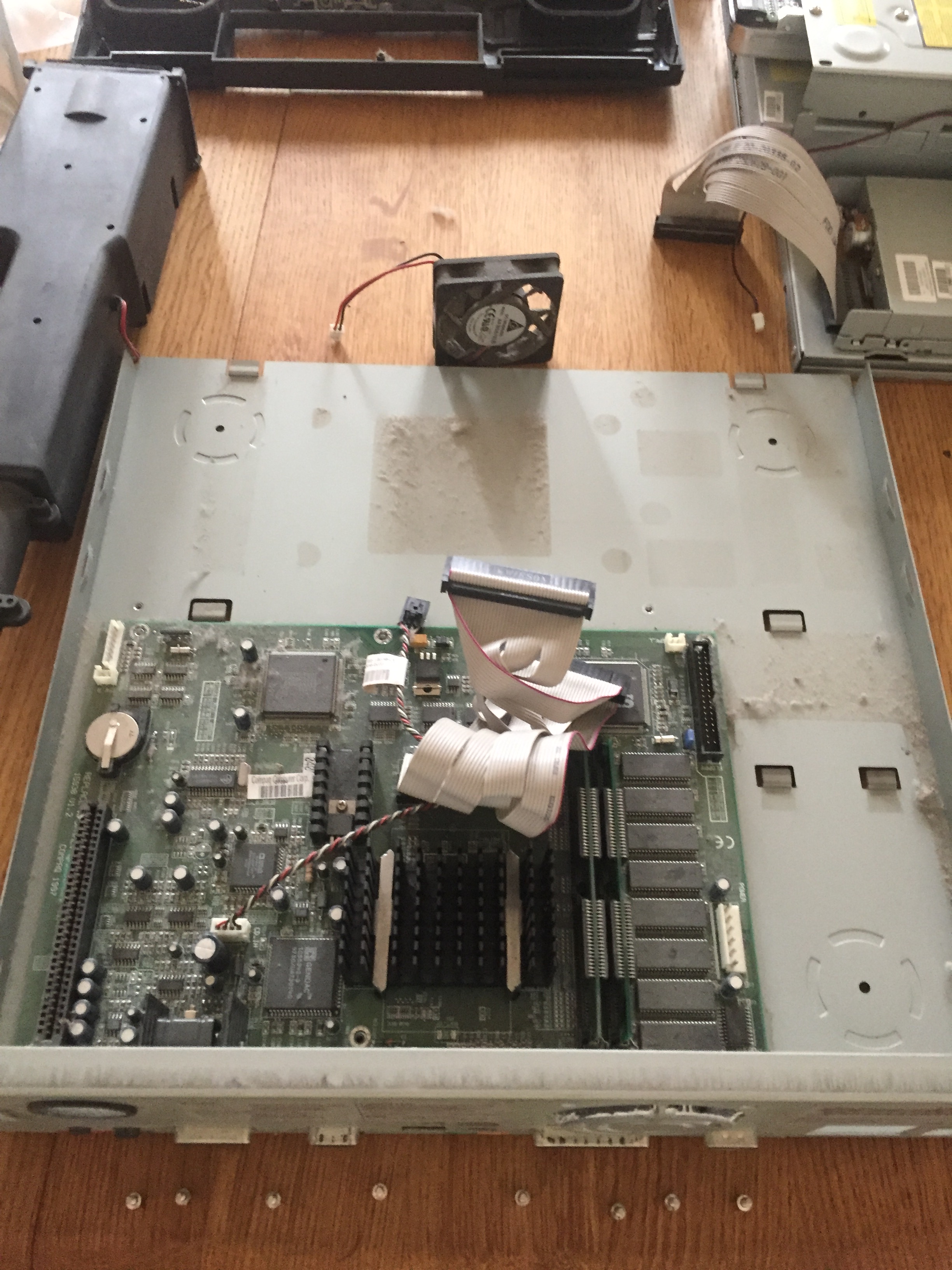 Note: The 8x CD-ROM drive was replaced with a CD-RW drive in subsequent images. This allows for the burning of files to CD-RW discs for transfer. This was a quick workaround to the lack of USB ports and limitations of the floppy drive.

After a careful tear-down, light brushing and vacuum cleaning, here is the partial re-assembled chassis: 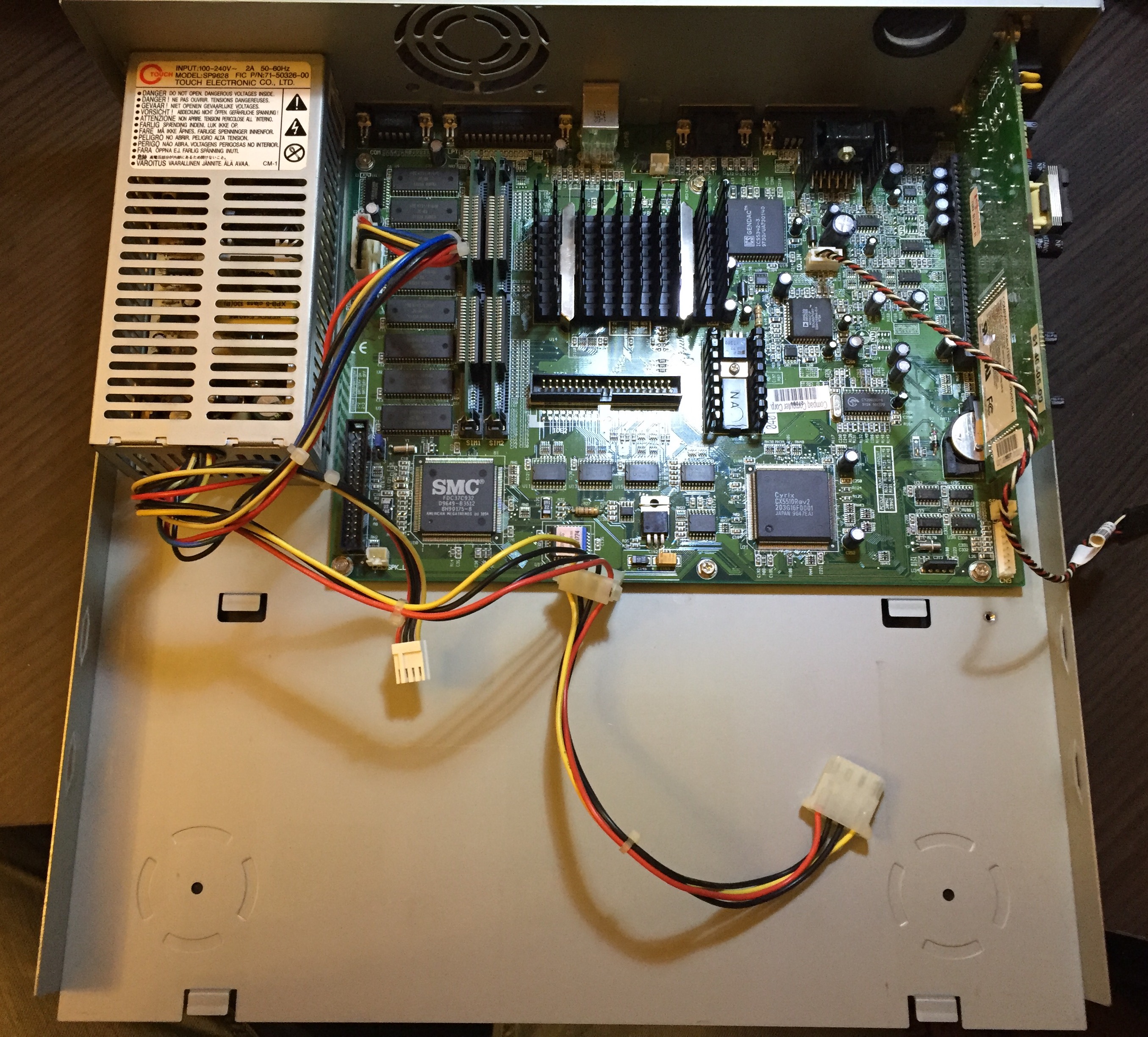 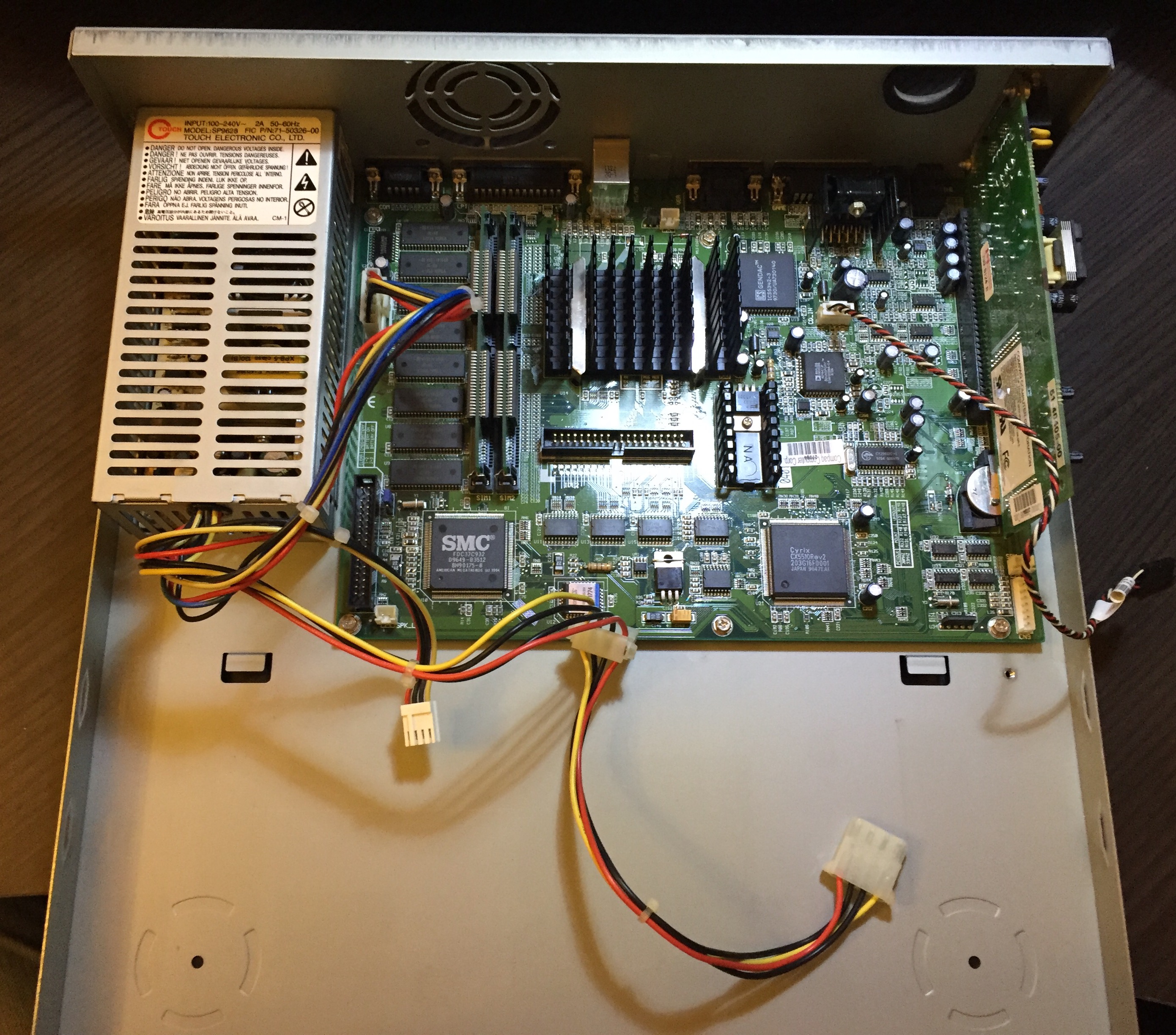 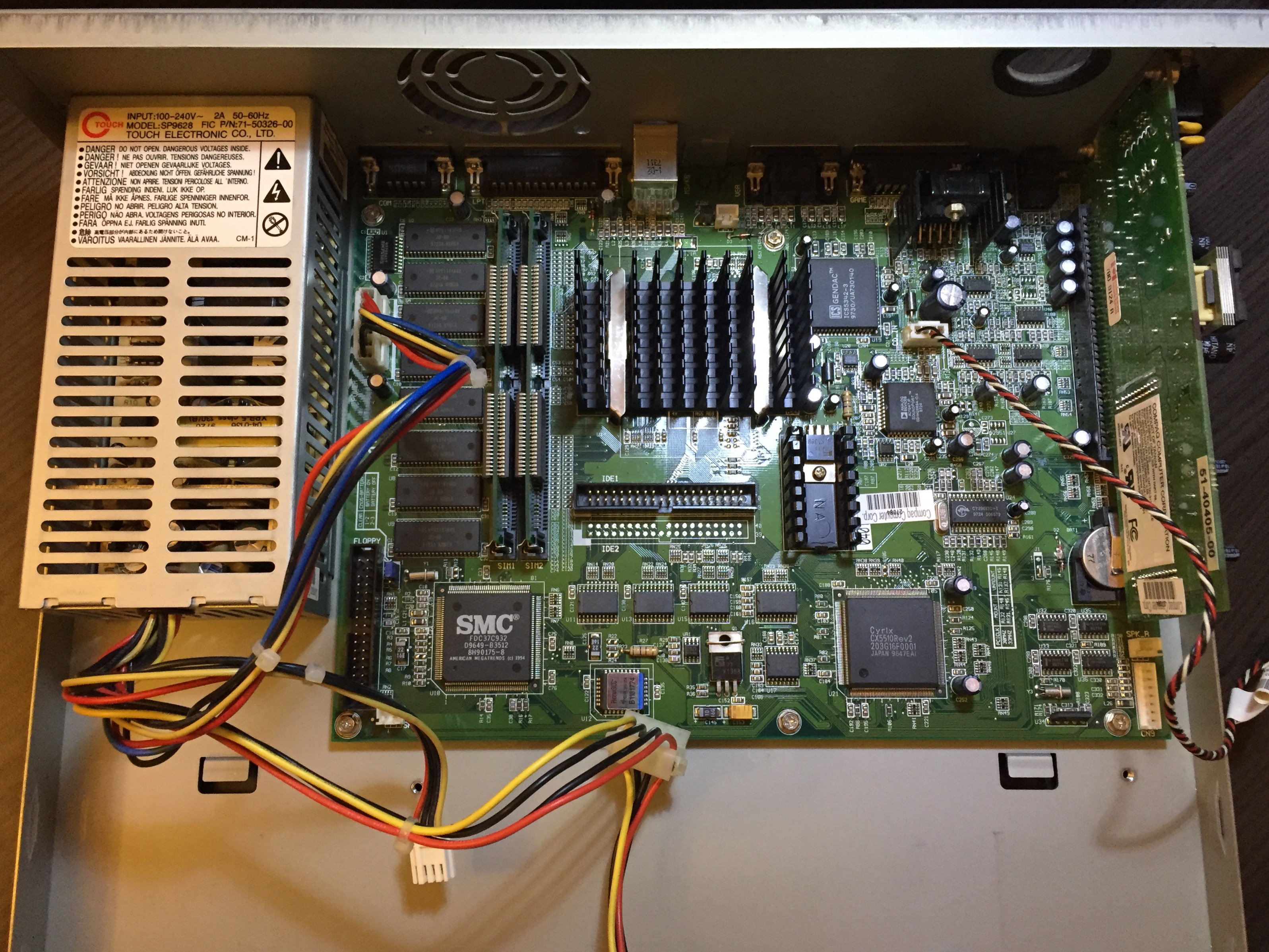 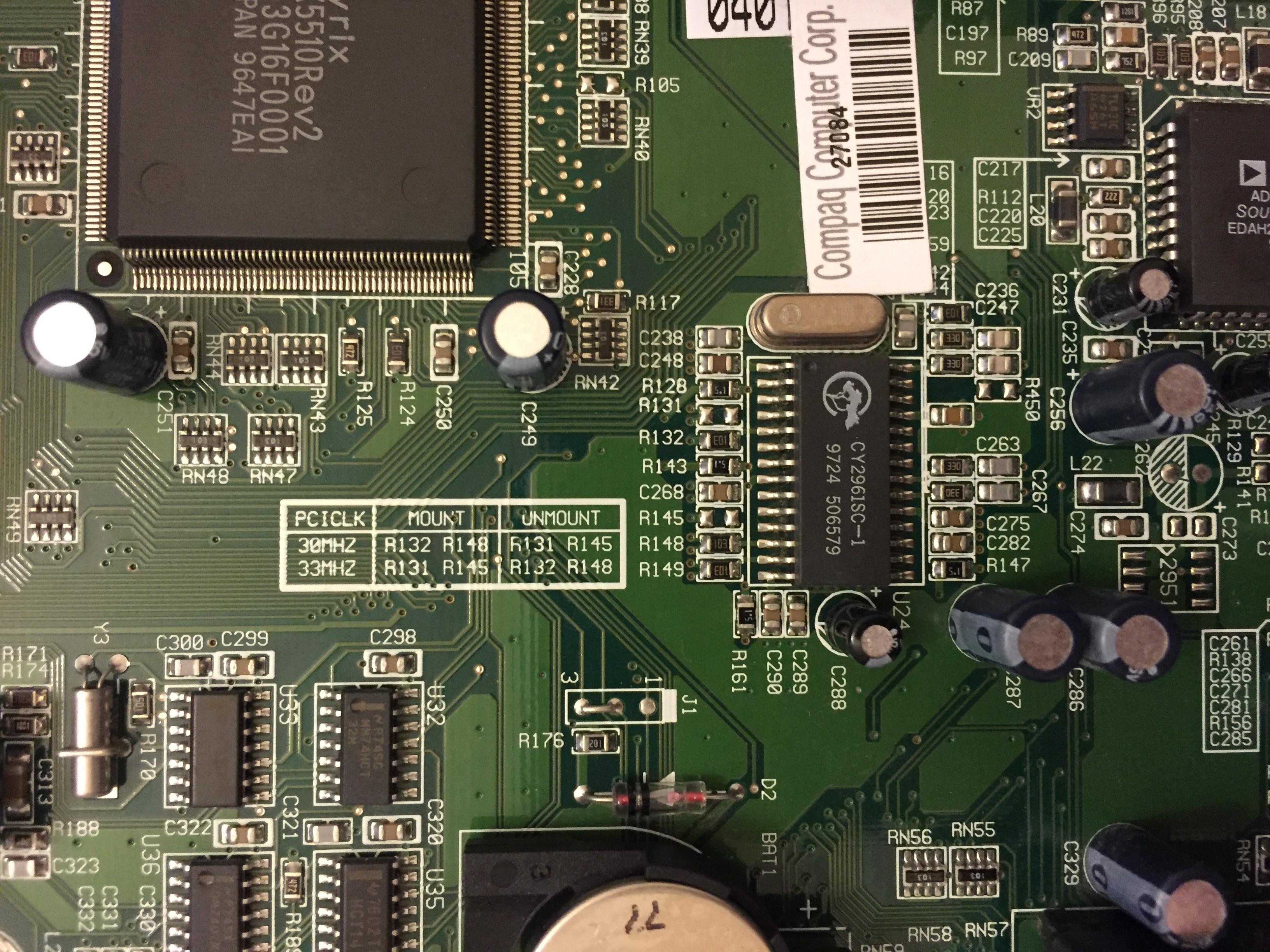 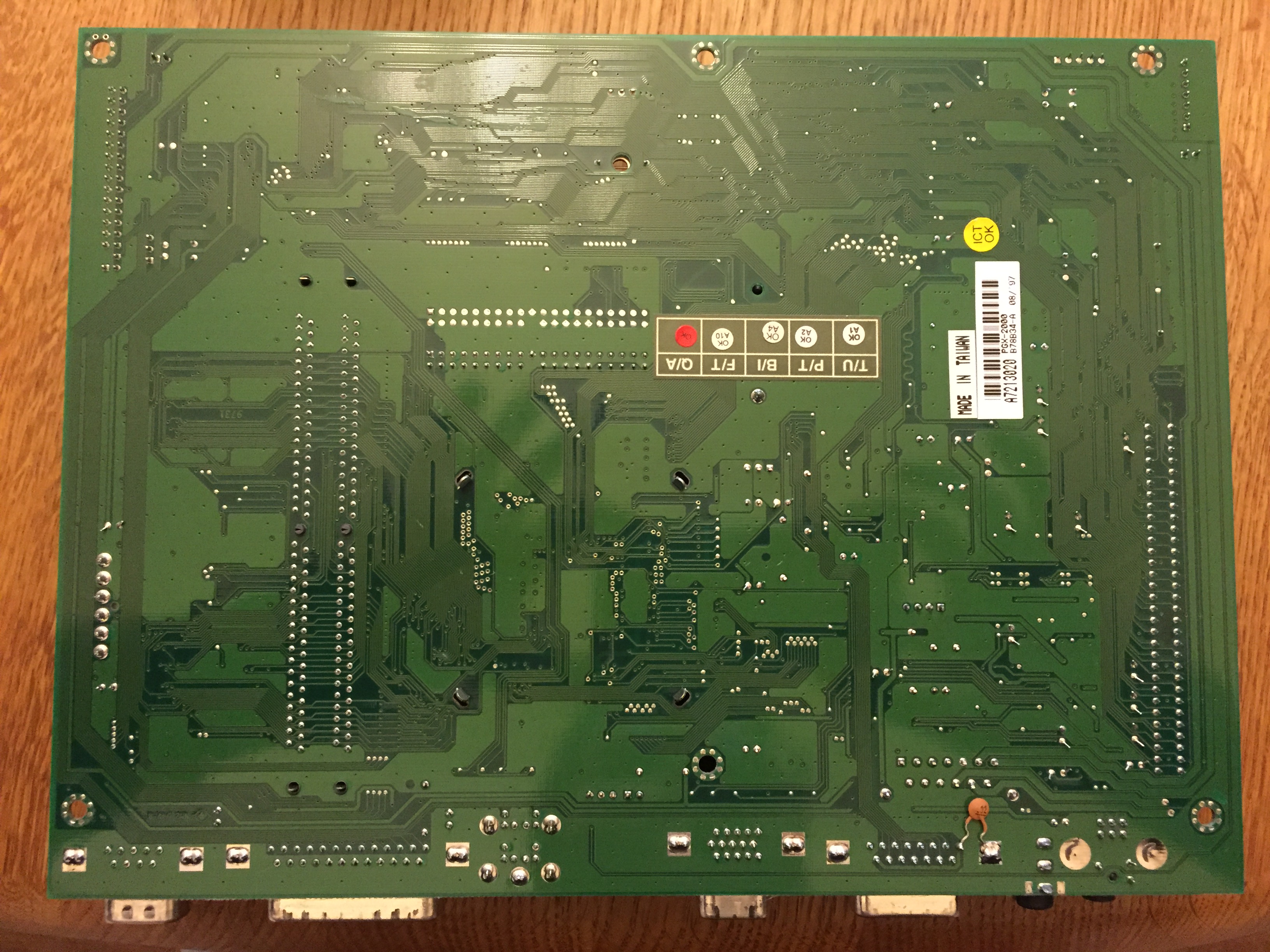 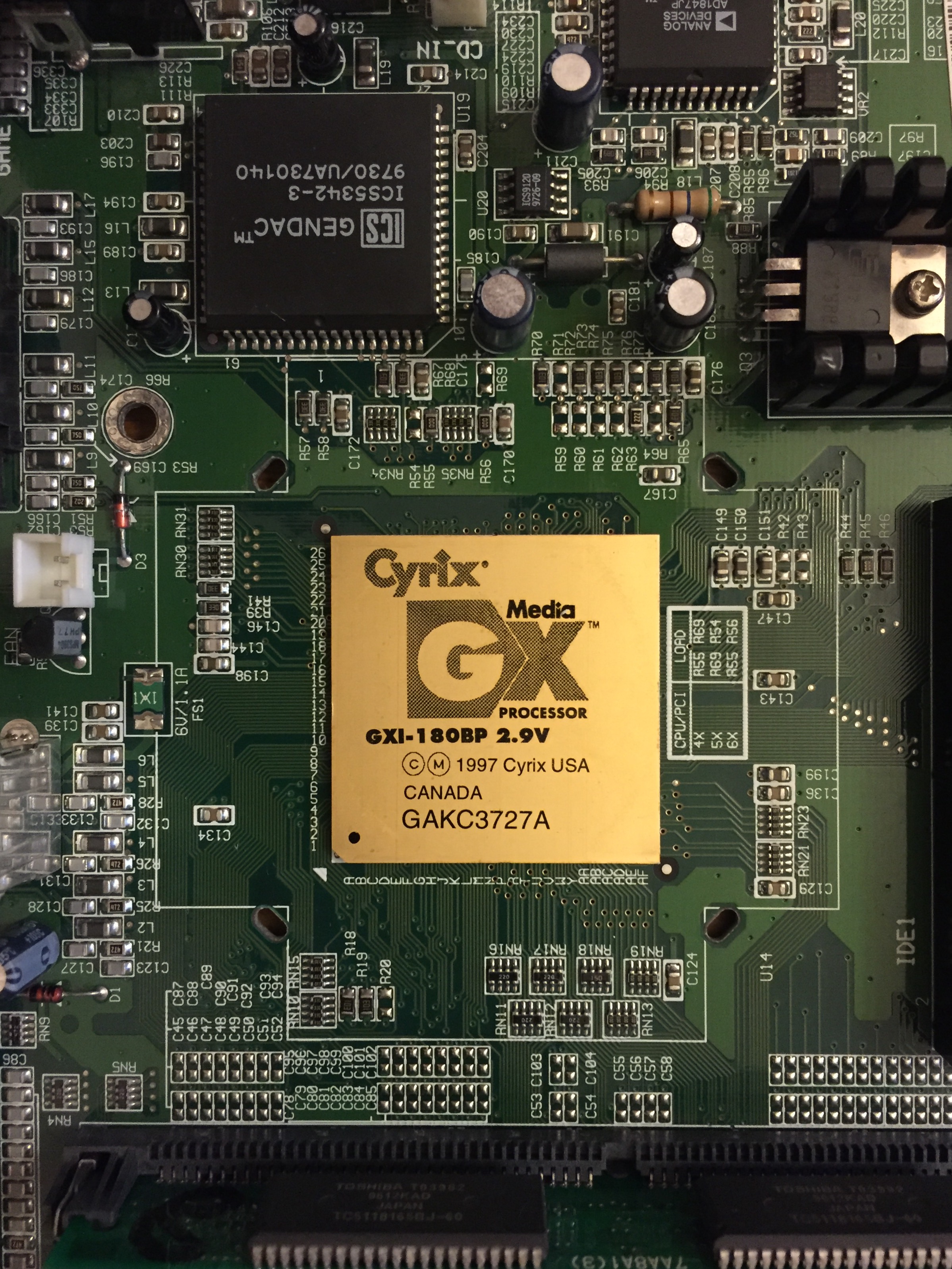 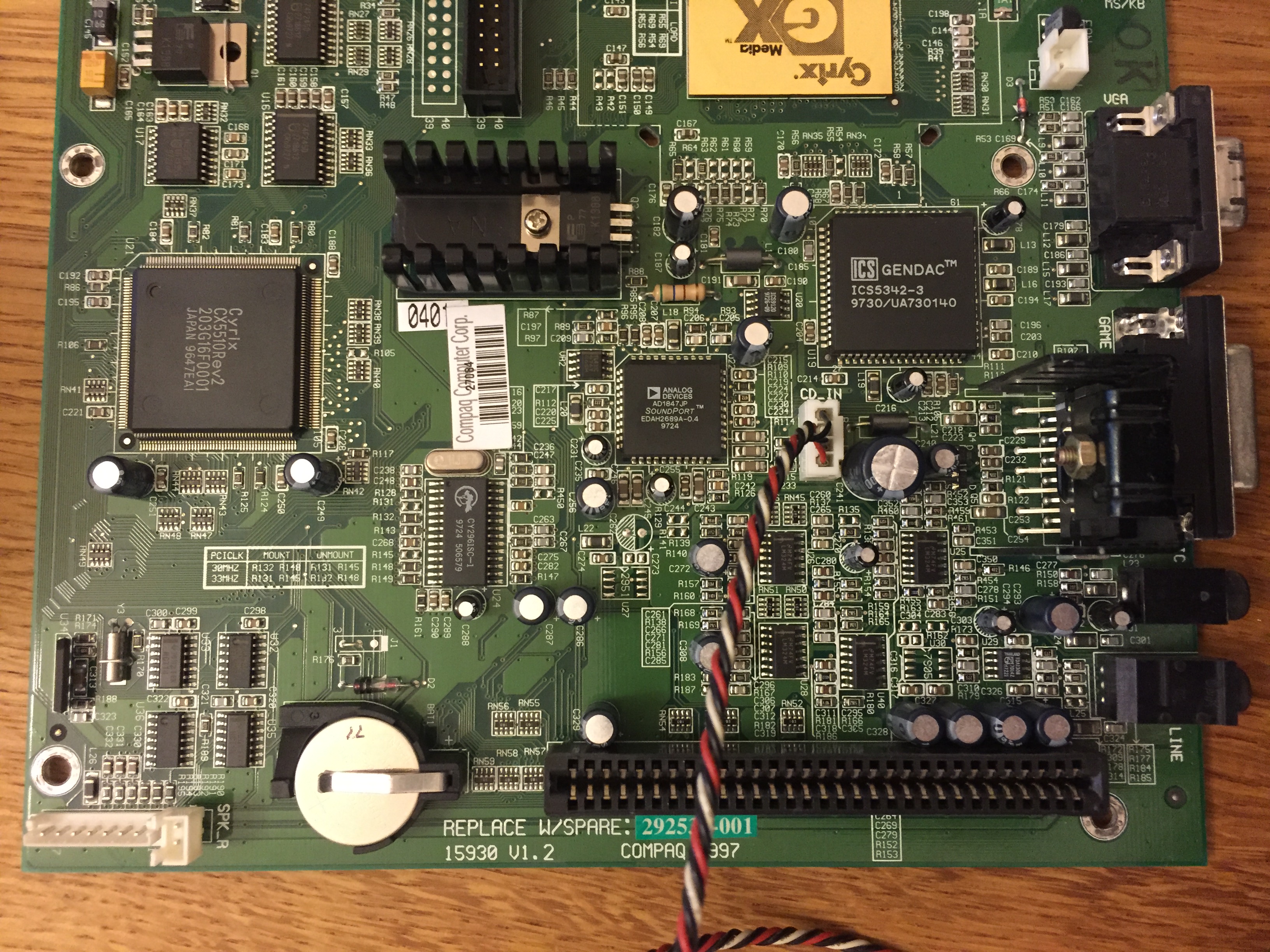 Note the excellent results obtained by dry brushing and light vacuuming. No solvents were used at any point on the circuitry. The computer was never used in a high humidity environment which does account for the lack of corrosion and ease of cleaning.

The Presario 2200 did not allow for much improvement. Upgrade procedures, ordered from easiest to most difficult, for this unit are:

This model uses 72-pin EDO single inline memory modules (SIMM) rated at 60 ns. To make matters more interesting, Compaq, like other companies at the time, did not follow the standard convention when it came to their RAM.

The industry standard method that was generally used in the 90’s with 72-pin EDO SIMM RAM used pins 68-70 as bridged jumpers to identify the RAM size and speed to the motherboard using the Presence Detection designation. Companies like IBM, Compaq and others used a proprietary arrangement of the jumpers on pins 68-70 which meant that any attempt to install a standard non-Compaq branded RAM would likely result in incomplete detection or complete lack of usability.

That being said, if you have a generic EDO RAM stick of a known size, you can manually bridge the solder pads using bridging resistors (0 resistance jumpers) in the appropriate configuration to your motherboard manufacturer.

The 2200 model originally shipped with a 1.6 GB Quantum Bigfoot IDE HDD. It’s upgrade compatibility seems to be capped at 8.34GB due to some limitation in the (1985-1994) Pheonix BIOS.

I attempted to replace the original HDD (for a separate Win98SE installation) with a Maxtor 20GB (ca. 2003) and it was not fully recognized.

A workaround for upgrading older PCs in the late 90’s and ealy 00’s came in the form of a HDD overlay. HDD manufacturers were aware of these mainboard limitations and usually provided a bootable floppy disk that can load the appropriate information, via software, after POST so that the system may access the entire drive.

A secondary workaround would have been a manufacturer BIOS update, however even on the waybackmachine’s web archive of the original Compaq company website - no such update was found to exist. Alternatively a BIOS dump and appropriate modification may show promise.

The Presario Desktop 2200 featured a single 8-bit ISA expansion slot which came pre-populated with a 33.6 kbps modem. Upgrades are further limited by the reduced height of the opening along the back of the computer. It was really only meant to host the custom end plate of the factory modem card.

Although some 16-bit ISA cards, like network cards, have been known to work in 8-bit ISA slots, albeit with reduced functionality, the battery holder on the motherboard physically limits the insertion of a longer 16-bit board. Any upgrades involve removal and relocation of this component.

Classic 8-bit network cards came with older 10Base2, BNC or other variants of connectors. This would require additional hardware and interfaces to even attempt a connection bridge to a more modern 10BaseT networking interface.

Material on this site is licensed under a Creative Commons BY-NC-SA 4.0 license unless specified otherwise.